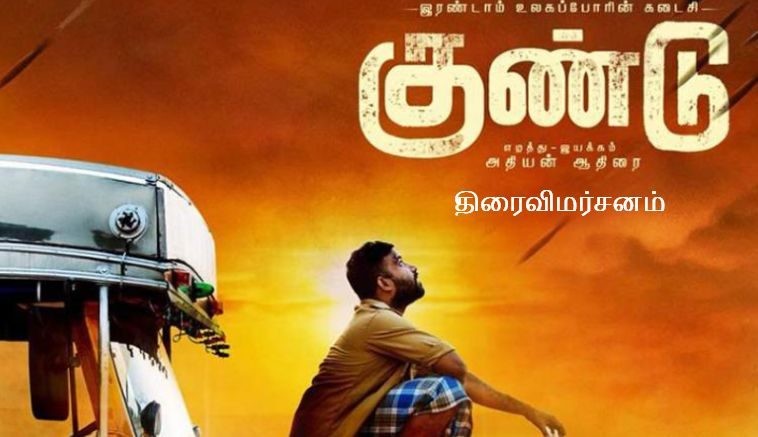 In Athiyan Athirai’s debut directorial Irandaam Ulaga Porin Kadaisi Gundu, the central antagonist is a non-living, century-old explosive. The narrative has introduced the bomb, and it builds the anticipation around the moment it’s fuse blows. Produced by Pa. Ranjith under the banner Neelam Productions, Gundu stars ‘Attakathi’ Dinesh, Anandhi, Riythvika and Ramadoss in central roles. Gundu traces the journey of Selvam (‘Attakathi Dinesh), a lorry driver who works at a scrap yard. Selvam unknowingly gets his hands on the titular explosive, which pulls him into the chase between an activist (Riythvika) and a corporate nexus. Gundu establishes its premise with a seamless combination of fictional and real. Selvam’s life is portrayed in an unblemished way and the world-building is aided through the authentic, culturally-specific visuals. The central macguffin (the bomb) connects characters of various contrasting motives. With the journalistic attention to detail, Gundu seamlessly weaves a fictional tale. The subplot involving Selvam and his romantic interest Chittu (Anandhi) seldom feels tonally jarring. The romance come as a breather in the tense sequences. Gundu evokes thrills in an inventive way by increasing the anticipation (will the bomb explode or not). As the screenplay moves forward, the film weaves elements of a rib-tickling satire, and the plot takes you to unexpected moments. Director Athiyan Athirai explores heavy themes of pacifism, corporate greed and cover-ups through observant filmmaking. ‘Attakathi’ Dinesh delivers a performance of a lifetime in Gundu. Take the scene where he argues with his ruthless employer when his co-worker Velu (an effective Ramesh Thilak) gets severely injured. The scene is a towering example of great physical acting. Not even a single talent is underutilized. Tenma’s pulsating rhythms add more demonic shades to the explosive. ‘Mauli’ is surely a pick of the terrific album. Gundu is masterfully shot and edited, which adds more grit and texture to the eerie, sweat-soaked mood. In the time of mindless war-mongering, Gundu is a relevent anti-thesis.