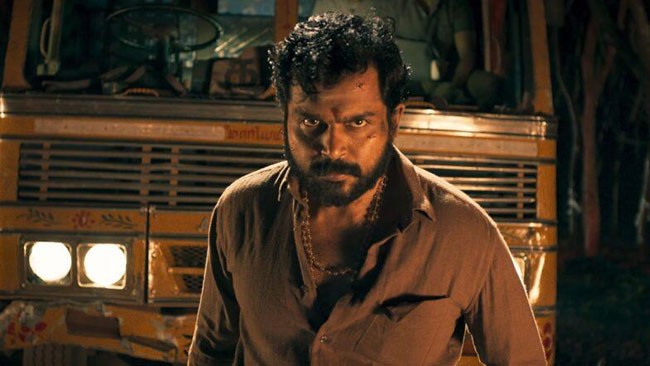 Khaidi begins with a superb setup. Bejoy (Narain) leads a team of cops to confiscating a record amount of cocaine, hidden in a secret cell under the commissioner’s office. The drug mafia manages to put the officers under sedation by spiking their drinks. An injured Bejoy enlists Dilli (Karthi), a life-term prisoner who’s out on parole to meet the daughter he has never seen to save the situation. A group of college students find themselves stranded at the commissioner’s office with a line constable for company. They prevent the gangsters from breaking in. The best part is, Lokesh Kanagaraj gives us all this in the first 20 minutes of Khaidi, a tense, impressively shot action thriller, with Sathya Sooryan wielding the camera. The director manages to give us a pure genre film minus the commercial frills so common for South Indian cinema. Despite the two hours of action scenes, one hardly feels exhausted, thanks to excellent action choreography by Anbariv. The situation Dilli finds himself in is like a video game, crossing challenges of varying difficulty to transport the cops to safety. Different kinds of stunts, a chase, fist fights, et al are thrown in and just when it seems like it’s getting monotonous, there’s a glorious shootout. The fact that the entire film takes place in the span of a night gives it a unique flavour. Lokesh also comes up with interesting motley of characters like the temperamental brother of a gangster, the bold constable, resourceful students, spies in both camps and the daughter waiting for her father. The performances are just solid all-around with Narain lending just the right amount of vulnerability, Dheena adding levity and Karthi delivering a muscular performance. He especially moves you in the scene he narrates his past.