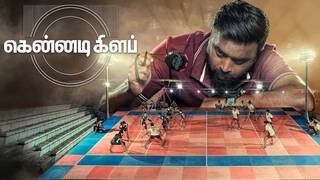 Suseenthiran’s Kennedy Club, produced by Thai Saravanan under the banner Nallusamy Pictures, is a sports drama that has Sasikumar and Bharathiraja in the lead roles. The film revolves around the lives of underprivileged women from Ottanchathiram (Dindigul), who become Kabaddi players, not just for the love of the sport, but they also believe Kabaddi will help them come out of poverty. The film starts by throwing the spotlight on these girls than the leads. In fact, the opening credits start with the names of the Kabaddi players, followed by Sasikumar and Bharathiraja. While the portrayal of these women is extremely realistic, the film does go overboard at a few places. There is a dialogue where Muruganandham (Sasikumar) tells the girls that they are not like other women who party and go out to enjoy. There was no need to vilify a set of people in order to glorify another. Storywise, the film falls into a lot of cliches associated with a sports film. There is a corrupt politician, the coach faces difficulties during the climax of the competition, the surprise package player for the finals, the usual dialogues on how politics and corruption are spoiling sports in India, and the list is endless. Murali Sharma as the corrupted Indian Team selector fails to convince you with his performance and that results in a very weak antagonist. Kennedy Club has to be appreciated for getting the nuances of the sport right. The use of real-life Kabaddi players aids the film to a great extent and makes everything believable. D Imman’s music provides able support to these scenes, with the “Kabaddi Kabaddi” track standing out. While Gurudev’s cinematography was good to the genre (a few aerial shots were well captured), a bit of work could have gone into the costume design department, especially in the National Championship portions. This makes it quite hard to identify the teams, as the edit was faster during the match sequences. The film has a balance in scenes involving Kabaddi and their lives. Both of them are shot in a racy way, which looks great for the Kabaddi scenes, but sticks out in the latter. Those scenes could have been a bit slower so that the essence of the region was captured even better. Here it seems like the film wants to rush to the Kabaddi portions that are quite engaging.